Cheesecake! A combination of two of life’s greatest joys: cake and cheese. What’s not to love?

Did you know that the very first cheesecake is believed to have dated back to ancient Greece? Historians say it was actually served to athletes during the first Olympic Games in 776 B.C. It’s rich history even involves being used as a wedding cake, though this recipe was far simpler than the ones we have today.

The common version we think of in modern times is actually New York Cheesecake. This was invented in the 1900’s by German immigrant Arnold Reuben, after the (accidental) creation of cream cheese in 1872.

The cheesecake we know and love today typically features two parts: the crust and that delicious cheesy center. Cheesecake crust differs from the typical pie crust because of its crunchy, crumbly nature. Many variations, like the mouth-watering breakfast cereal cheesecake you’ll see below, often feature cookie crumbs as the binding component.

The center of the cheesecake is where everything comes together. Cream cheese provides a smooth, mildly savory taste that is easily customizable with other ingredients. Today’s versions show up in chocolate, vanilla, Oreo, fruit, and many, many other flavors. The versatility of cheesecake is probably one of the reasons why it’s become such a popular dessert. It’s also fairly easy to use non-dairy alternatives like coconut cream and cashews to make this treat safe for vegans, too.

Now to the good stuff. If you’ve never tried your hand at cheesecake-making, now is the time! This scrumptious cereal-flavored delight will leave you craving your Saturday morning cartoons. Start with the crust and work your way up until you’ve mastered the art of this famous dessert.

For the cheesecake filling:

 fruity pebbles as desired up to 1 cup

1. For the crust: Prepare a 9 inch springform pan by lightly greasing the edges of the pan with

cooking spray, then wiping gently with a paper towel. Line the bottom of the pan with parchment

2. Grind the cookies into a fine crumb using a food processor or blender.

3. In a small bowl, melt the butter in the microwave for 30 to 45 seconds. Pour the melted butter

over the cookie crumbs and stir until the crumbs are well coated.

4. Pour the crumbs into your springform pan and press firmly into the bottom and up on the sides to

create a thick crust. Refrigerate the crust while you are preparing the filling.

5. For the filling: In a microwave-safe bowl, combine the white chocolate chips and 4 tablespoons of

until the chocolate is melted. Stir until completely smooth.

6. Place the mixing bowl and whisk attachment in the freezer for 5 to 10 minutes to chill.

7. Prepare the whipped cream. Pour 1 ½ cups heavy whipping cream into the chilled bowl and use

form. Set the whipped cream aside.

8. Beat the softened cream cheese until it’s completely smooth. Scrape down the sides of the bowl

as needed. Next add the granulated sugar and vanilla extract and continue beating until smooth.

9. Next add the melted chocolate, beating until it’s completely mixed into the cream cheese.

10. Finally, slowly fold in the whipped cream in two batches until it’s completely smooth. Pour the

11. For the topping: Prepare another batch of whipped cream by placing your bowl in the freezer for

5-10 minutes. To prepare the whipped cream, pour the heavy whipping cream into the chilled

starts to thicken. Slowly add the powdered sugar and continue beating on high speed until stiff

12. Garnish with fruity pebbles. This cheesecake must stay refrigerated. 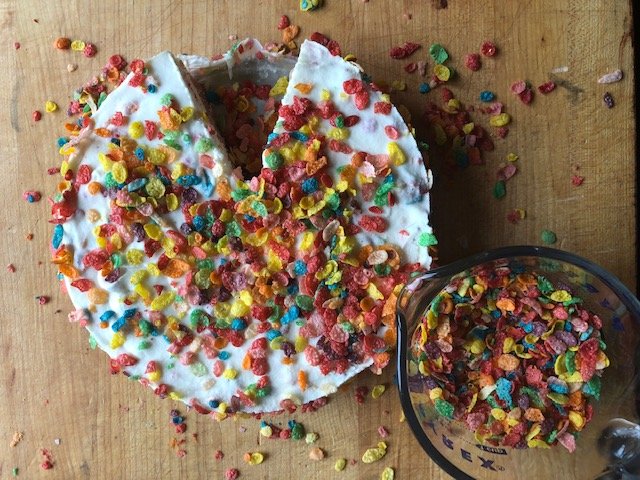